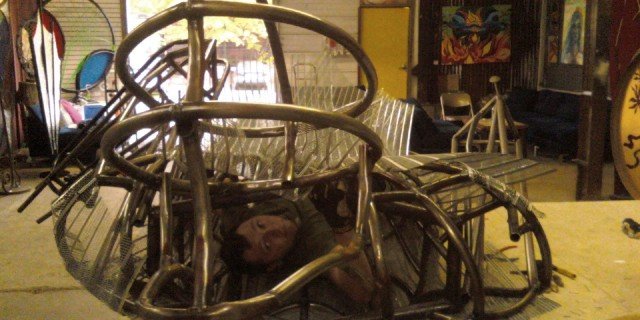 And The Volatile Molotov Says:

Everybody wants to know about the Mermapus.

She’s rad. She’s an old friend of mine with a life of her own. Many people have known her well over the years, seen her every day, said hello aloud as they walked by even, but nobody knows her like I know her. I’ve touched every inch of her steel body and lifted every ounce of her 4200 pounds. She’s cut me, burned me, pinched me and poisoned me. She’s warmed me, taught me, moved me and blessed me. After all our adventures, we’re still on pretty good terms.

A few years back, I rented a pretty baller row-house bachelor pad in downtown Greensboro, NC. I had way more time on my hands then than now. One of the things I loved to do was to sit in front of my bay window at night where I could see the skyline and draw. I would draw for hours, listen to music, and watch the sunrise sometimes. It was a lot of fun. Many great ideas and drawings were penned in those days, but no drawing ever expressly threw itself onto the page like the concept drawing for Iscariot. She (at that point a he) furvently commanded the space of the page like no other sketch before her. I took a moment to feel the drawing on the page. It had begun. 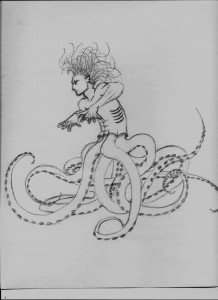 I operated a surprizingly tiny space in an artist collective by the name of Lyndon Street Artworks at the time. I knew several other sculptors there, but I was selective in whom I told about the project. I didn’t want to let the word out that I was making a huge piece until I was certain I could pull it off. I’m a man of my word. I absolutely despise going back on it. I started troubleshooting the project immediately and eventually came to the astute conclusion: “Man… that’s going to be a lot of work.” I was markedly wrong. It wasn’t “a lot of work”. That was a gross understatement. This project would be an astoundingly herculean effort that tested the limits of my health, vigor, physical strength, determination, finances and personal resolve.

One problem that our studio collective had was that our wonderful, talented, skilled, and experienced artists had been passed over on several occassions by clients, proletariat and municipal alike for art from out of town. Being outsourced is generally referred to as “not cool”, because it just doesn’t feel very good. I wanted to help put us on the map for world-class art, such that when Greensboro’s citizens wanted art, we were the absolute first place that popped into their minds. Soon we would have a centerpiece beacon that brought enough energy to keep their gaze forever.

As with all endeavors of such girth, it’s best to dip a proverbial toe in the water before diving in. With that in mind, I made three concept models to test various aspects in three-dimensional space. Aspects up for examination were things like posture, ways in which to stray from the human figure, load-bearing structure, cantilevering, weight distribution, relative material thickness and overall aesthetic momentum. People often ask me “How’d you get it to balance like that?” This is how. Luck is a part of life, some say. I say life is all physics and experimentation. “Luck” favors the prepared. Each concept model took two to three weeks to complete. The first one finished was the most similar to the final piece. She swept down from an imaginary perch just like the full size sculpture, taking flight on a curved path back up into thin air. The second model was a startled figure, reeling to escape from some unseen assailant. If I make another sculpture the size of the full scale Iscariot one day, it’ll be this one. That piece and Iscariot will be sold as a pair, as they would play off one another aesthetically. The last concept was the closest to the original drawing. The biggest difference there was that the drawing was floating peacefully in the abyss of the page, and the sculpture was in a position to soon take flight and swim off straight up into the air. (Side note: I had two friends pen a comic book based on the sculptures. We had a great time with the multi-media aspect of the twin projects. The posture of each concept model sculpture is a splash page in the comic. The page for this concept turned out particularly well. There are a few signed copies still hanging around.) 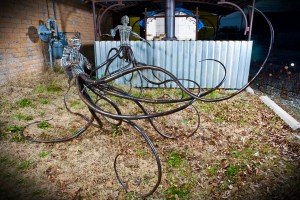 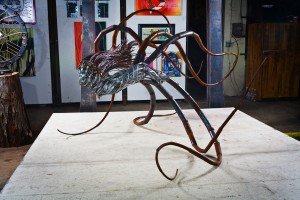 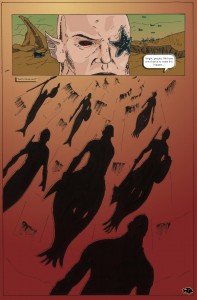 With all my questions answered, it was time to turn practice into performance.

First things first, I didnt’ have a crane, cherry picker or a boom for some sort of heavy machinery. How does one lift hundred-plus pound sculpture parts ten feet in the air with one hand and weld them with the other? This would be tricky. I spent a month building a mobile gantry that worked on all human power with chains and a system of pulleys. Engineering and extrapolation skills were flexed. Lifting system: check. 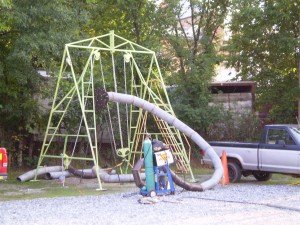 Secondly, there was materials sourcing. After a couple trips to various scrap yards looking for differrent sizes of tubing, I finally settled on using galvanized light poles as tentacles. They were weatherproof and tapered. That aspect was great. Sadly the galvanization made working with them very difficult, as the zinc is highly toxic. I had to take great measures while working with these every day in order to, you know, not die. Living long enough to finish the project is somewhat requisite of success. Let the cutting commence. 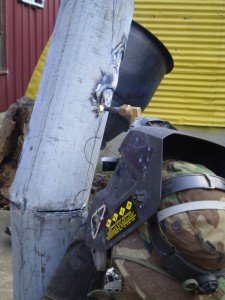 After months of slicing, dicing, folding and welding, pieces started to take shape. I broke down everything by priority and stockpiled parts to assemble when the time came. Pieces were awkward and heavy. Days were long, sopping wet and crushingly hot. The Seawitch was a skeleton, but her form was coalescing by the hour. Soon, people would be able to look her in the face and read her expression. I was excited, to say the least and smiled, squinting through the sweat in my eyes. 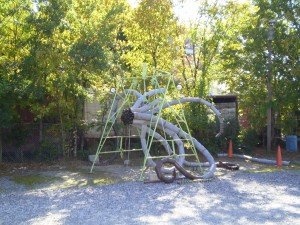 The opressive heat and thick humidity of the North Carolinian summer finally tired of tormenting the populus and slowly loosened its grip, fading into fall. As the days passed, the sculpture’s opaque backdrop of verdant foliage turned to crisp, yellow and auburn vestiges of the summer that was. After week upon week of sweat-soaked workwear, this was a welomed change. What a relief.

As the temperature dropped, the tune turned to finishing touches. Bending pipes for the hands, painting electrical conduit for the hair, tying sheet after sheet of ribbed plaster lathe onto the structural torso armature as a skin- all were crossed off the list in time. The final bullets were centered around the show. It had been a while since I’d put together an expo of that scale and had forgotten what a pain in the ass it could be. A shop’s “working condition” and “show condition” are two completely different things. “What? We need what now?”- stands for comic book pages, lights for the pieces, horsdeurves, wine for refreshment, cloths for the tables, tables to go under the cloths, etc.- all the things I never thought we’d need came together, of course at the last minute. There were a few things I’d like to have presented differently, but hey, I didn’t have a personal assistant (Anybody need an unpaid internship? Come on- you know you wanna!). 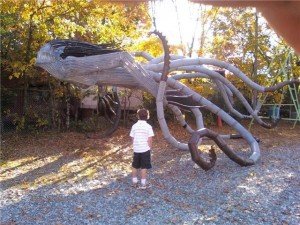 She was so beautiful the night of the show. She was done up in these sweet gelled lights, thanks to a good friend of mine who helped run a special events company at the time (check out ARC the Guy on Facebook). We had a sound stage and music. Several people asked for photos and autographs from myself and my comic author buddies. They were really impressed. I was relieved to see my new friend all put together and standing tall. Soon after the show, she was featured in a local downtown magazine and the patrons started to trickle in. The beacon shown, and those that saw it knew that art, real art, was right there in their backyard. The community could start giving their art money to the artists that would patronize the same community. 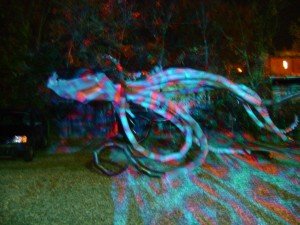 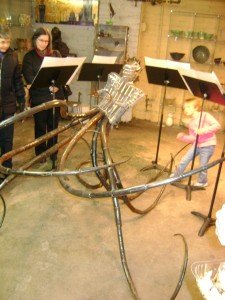 The cycle was complete. All told, eight months had passed. I effectively collapsed and slept for weeks in an effort to recoup. I camped quite a bit and continued to watch a lot of science programs and nature shows, which I feel likely planted seeds for Iscariot in the first place. Here’s hoping the next project is, well, not necessarily bigger and better, but just as fresh and vigorous. Go the distance, people. It’s worth it.